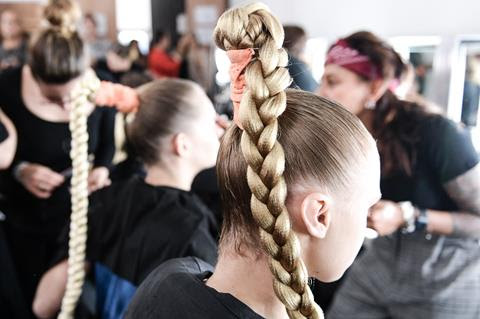 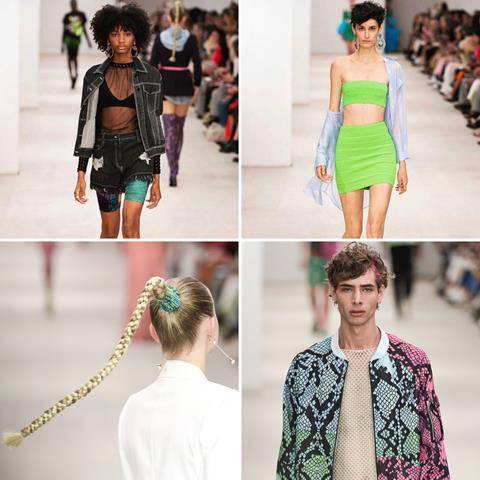 It’s my second time working at LFW backstage, I am part of the TIGI Session Team and I can’t express enough how much I love it!

– Mark Fast often gets his theme from London life and this show was no exception. The energy from the East End portrayed in his show  Eighties club wear was represented and spanned nylon shell suits, bandage mini skirts and fishnet singlets were all incorporated.

However, the East End wasn’t the only theme in this show, the clothes were about more than just a night out. In fact, the current news coverage surrounding the devastation of the Amazon’s rainforest were also a drive with the designer intending the showcase to be “a tribute to the beauty, colour and creations that were lost.”

This then led us to create hair that represented both these themes with passion and fulfilment. We created an 80s style ponytail with braids and worked with the models natural texture. The texture look gave it the amazon feel but with style. The products that were used were very simple but had a great effect on the models hair, we used Tigi bed head Superstar, Catwalk haute iron spray and Copyright maximum hold hairspray.

The energy back stage of having the opening show was immense. I was so excited (and also very sweaty) As the day progressed I became less stressed and began to enjoy it so much. So much was happening it was so busy suddenly we were ready to begin the show and everything was calm we were ready to go!

Helping complete the designers new look and to make their dreams come true and working alongside an amazing team of  talented people together creating for the runway.”

EVELINA BACK STAGE @ FASHION FOR RELIEF 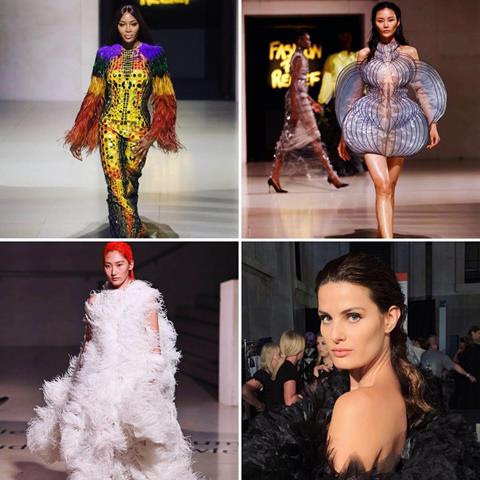 ” The second day of LFW was Naomi Campbell’s “Fashion For Relief” show, lead by Johnnie Sapong, Johnnie was brilliant, and working in that environment is the best experience a session stylist can ask for. He did Naomi’s and Stella Maxwell’s hair.

Johnnie Sapong demonstrated his feeling and texture for the  models then we were off on our own with over 50 Girls and boys to prepare. We created  many new methods making different shapes and textures, which was amazing to find new techniques that will filter through to the salon and all for a good cause! 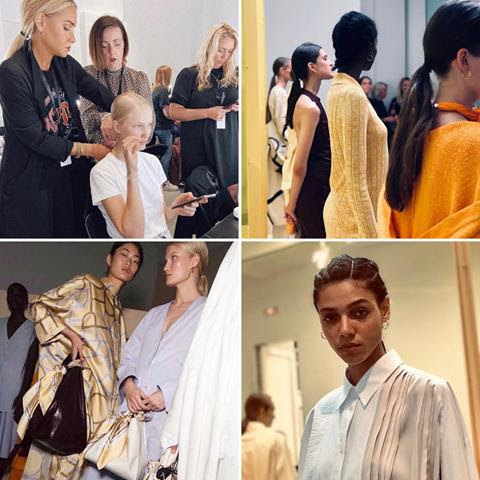 “The  New creative director of the London shop and fashion brand Joseph, Susana Clayton, showed her first collection in Paris this week.

I find a pleasure and an ease to deliver the high expectation demanded by the designer I found that the clothes resonated with the way I like to do hair.

Working alongside the Session team was great as we spend more time together the feeling of team gets better and better this time travelling together to Paris from London. Hopefully next season New York